We just got back from 3 glorious days in the Bay Area. It was not a spur-of-the-moment trip, but it was a spur-of-the-moment packing job which is very unlike me. I’m usually extremely organized to the point of being too organized. This time I tossed things in a small bag in ten minutes and jumped in the car. Here’s what I wore for 3 days in the Bay Area. 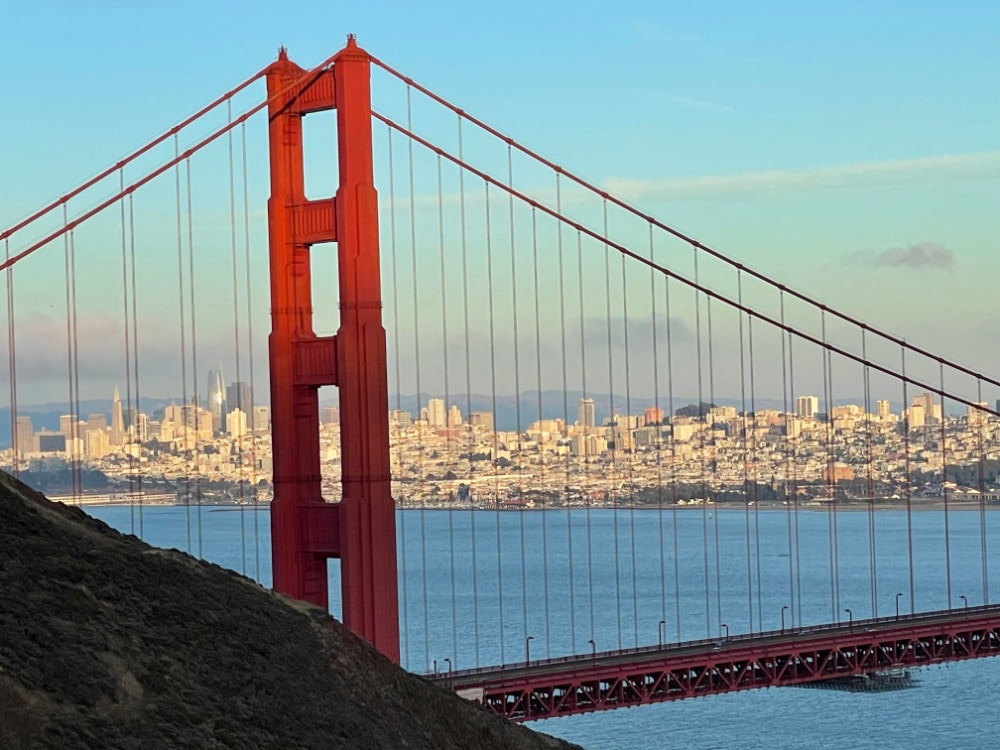 We left early Friday to get a jump on the weekend traffic. After checking in, we drove up to the lookout above the Golden Gate Bridge. It’s a magnificent spot to watch the city lights come on as the fog rolls through the gate. 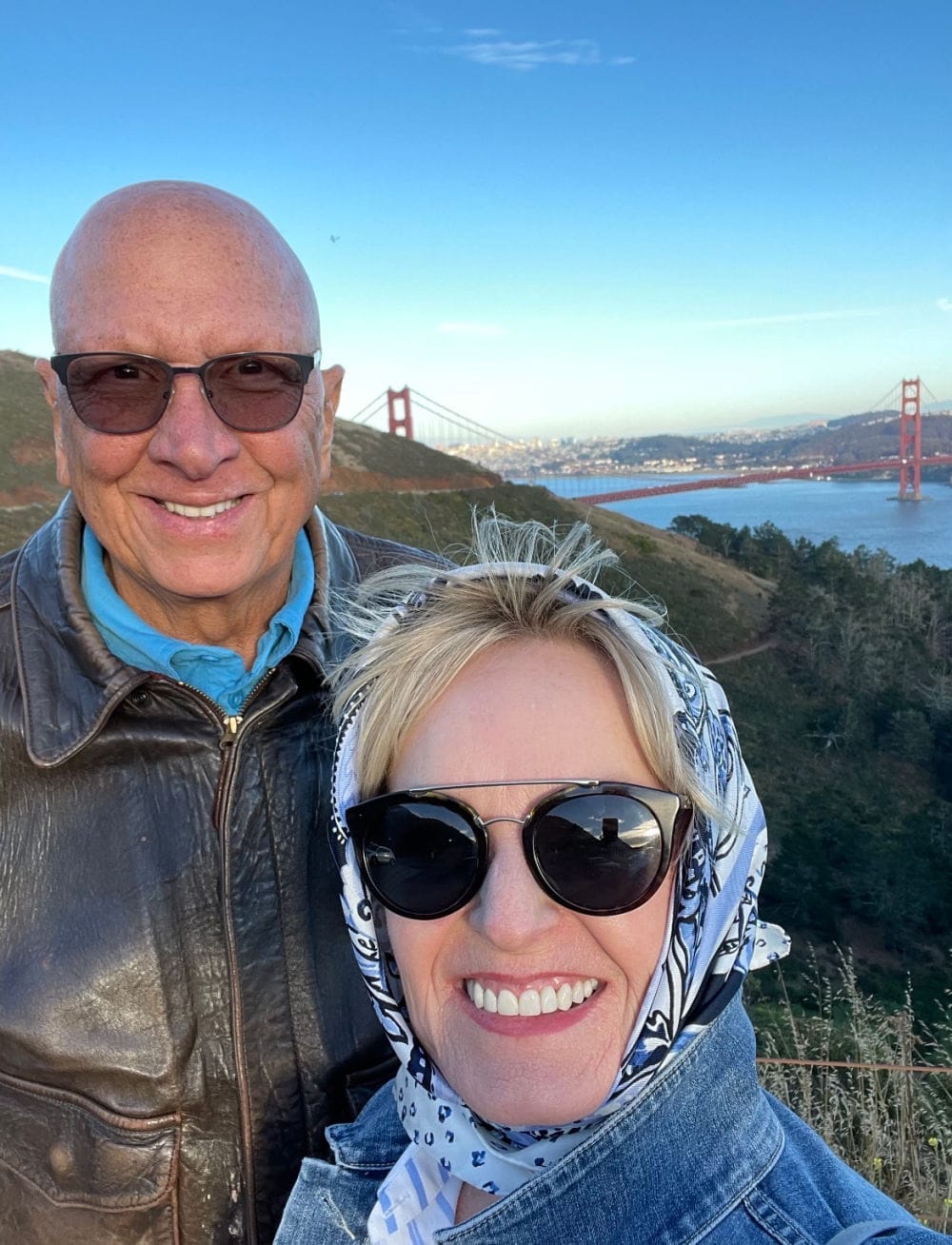 It’s a magical site and always very windy so I knew enough to pack a silk scarf to cover my hair. The stronger the wind, the more my hair breaks so a scarf is always a good idea. 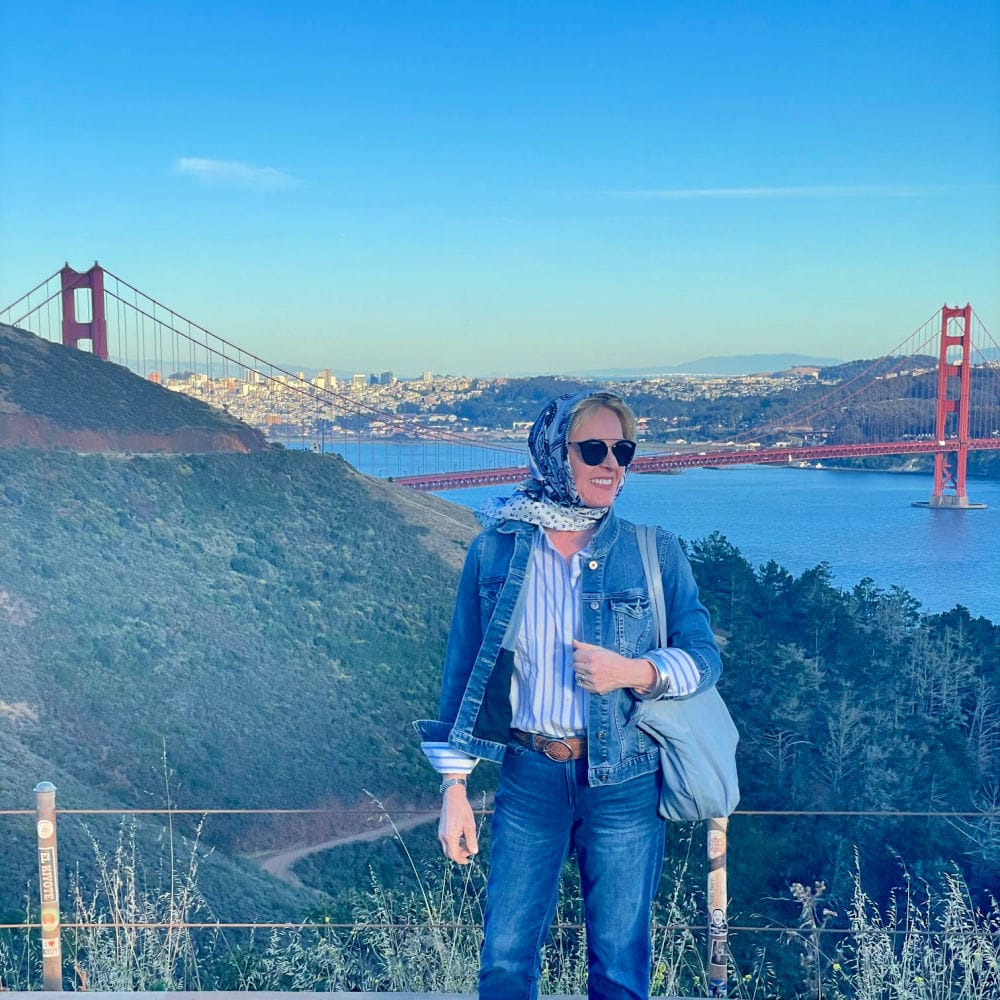 I wore denim on denim and was so glad to have the jacket. The Bay Area has natural air conditioning that we don’t get inland and I knew it would get chilly. I’d briefly considered packing a cashmere wrap, but the wind can go right through those so the denim was perfect.

The following day was sunny and warm. We had lunch with my sister-in-law, played several rounds of cards, and wandered around Sausalito. 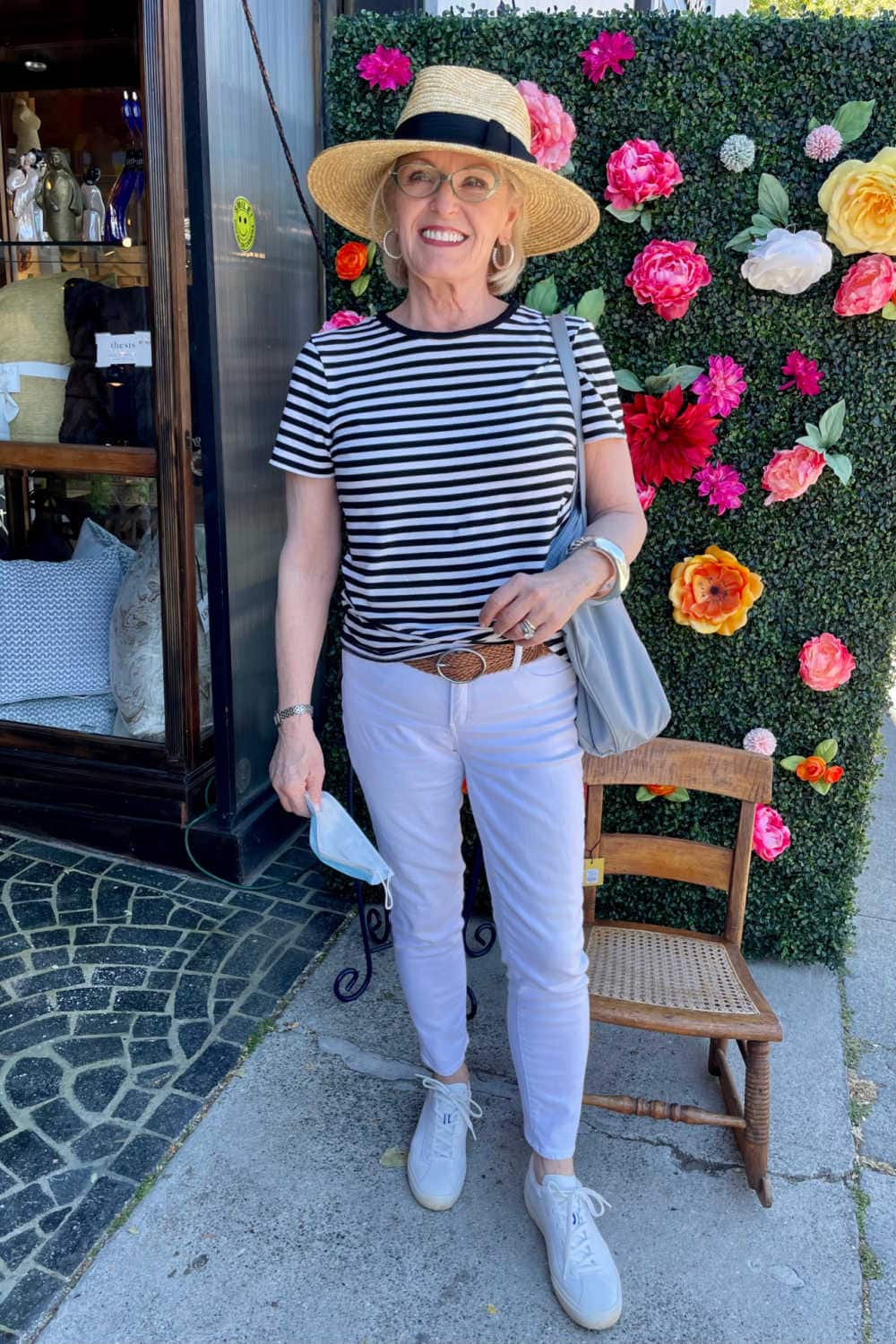 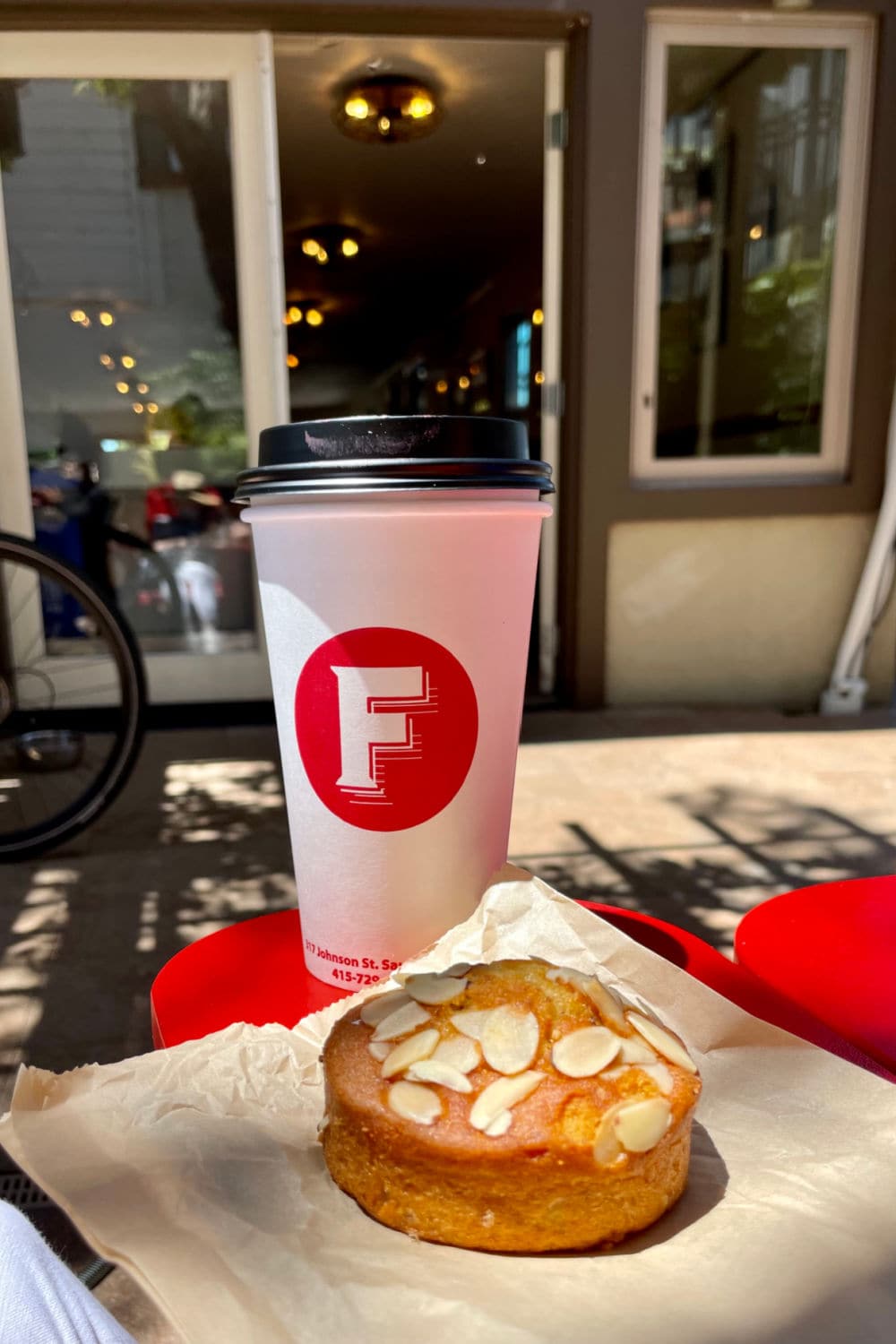 After tanking up on tea and pastries at the Firehouse Coffee shop we headed over to Muir Woods. 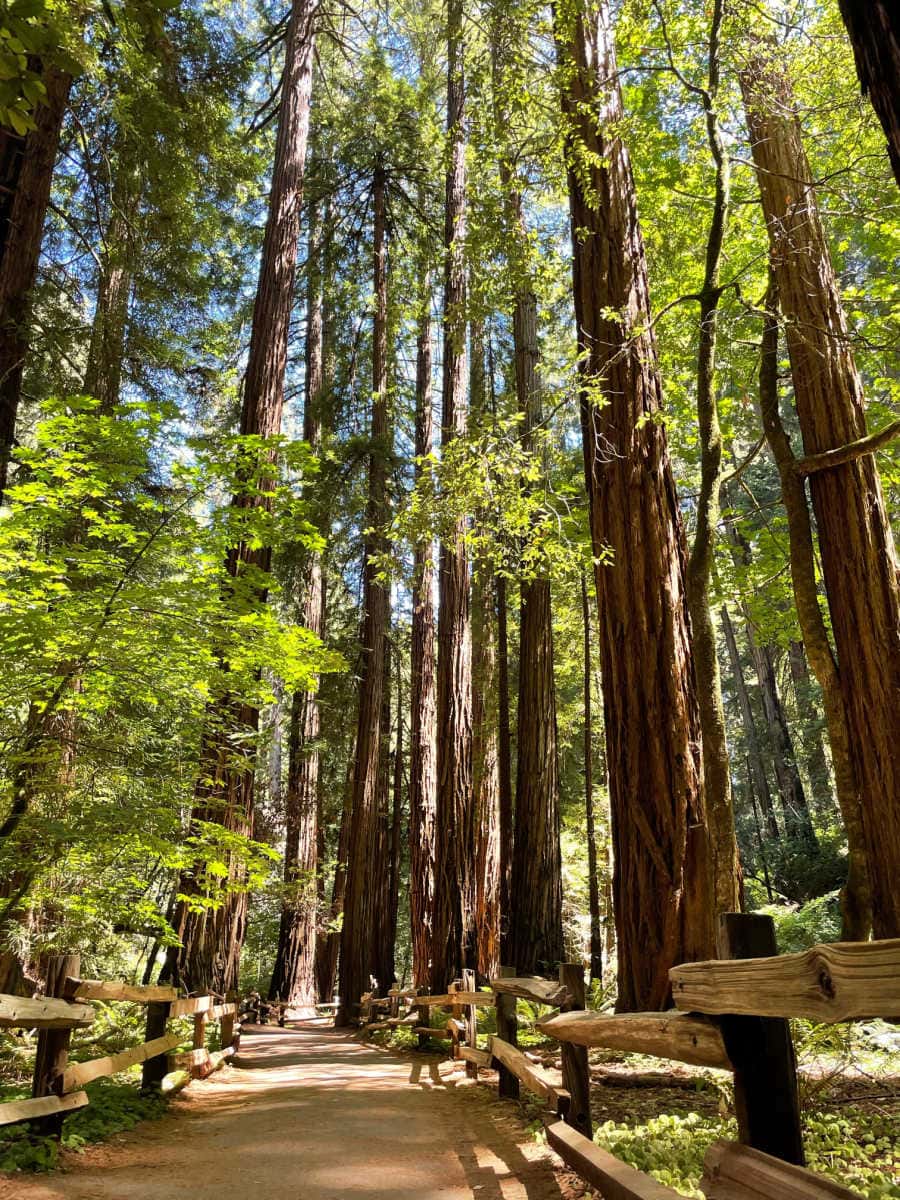 There aren’t many tourists this year so the forest is quieter than usual, which to my mind, makes it more breathtaking than ever. 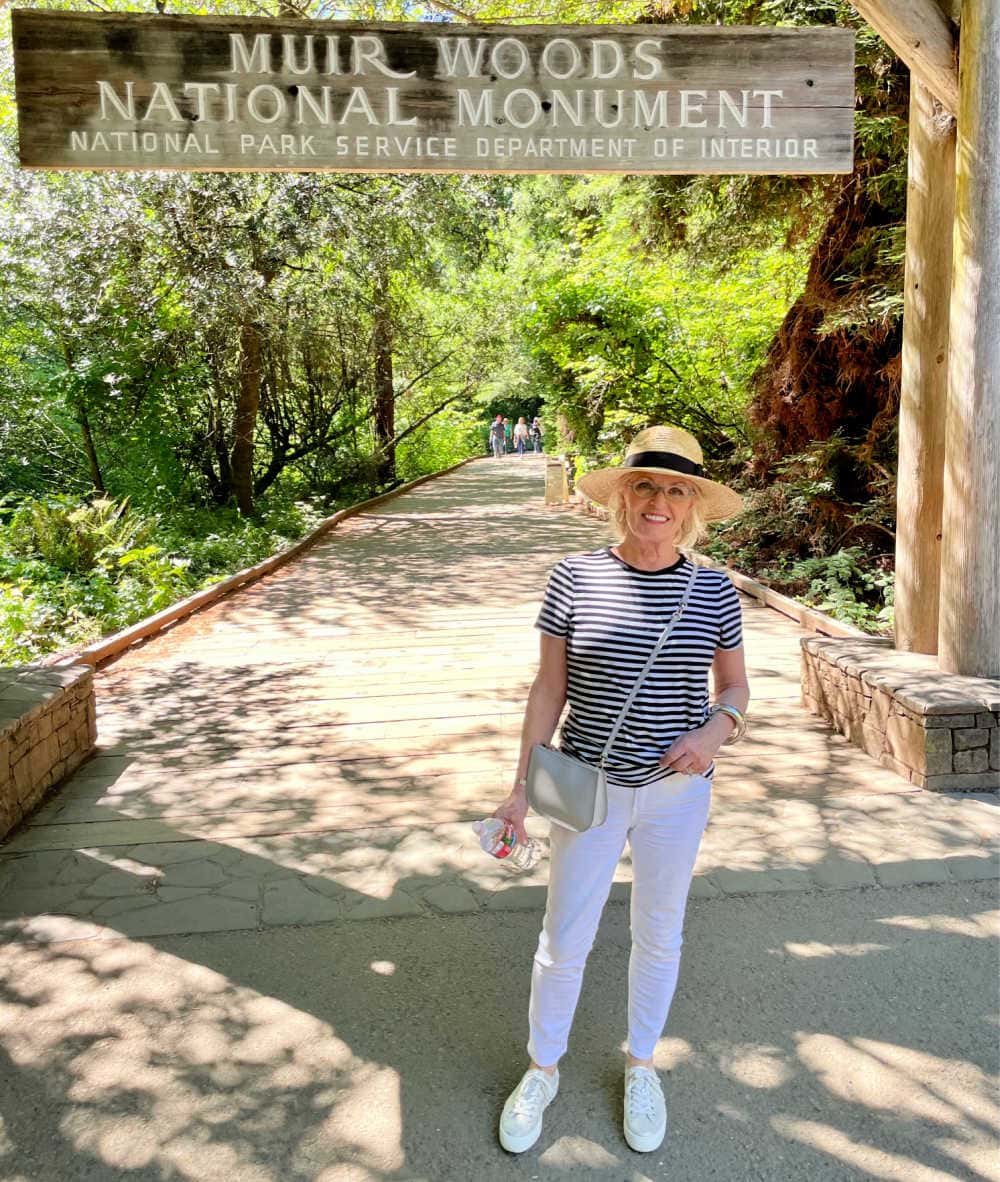 By the time we got to the forest parking lot, my feet were beginning to swell so I swapped into these metallic sneakers which are the widest ones I own and super comfy. My white jeans got dusty but they’re stain-resistant so I didn’t worry about them. I swapped my tote for this convertible crossbody bag to keep my hands free.

After a few hours, we drove down the coast to Half Moon Bay and had dinner at a small fish restaurant on the dock. The fog was getting very thick at that point so I hauled on my trusty denim jacket and wrapped the scarf at my throat. The Bay Area is made up of micro-climates so you need to pack with layers and be prepared for it to change quickly. 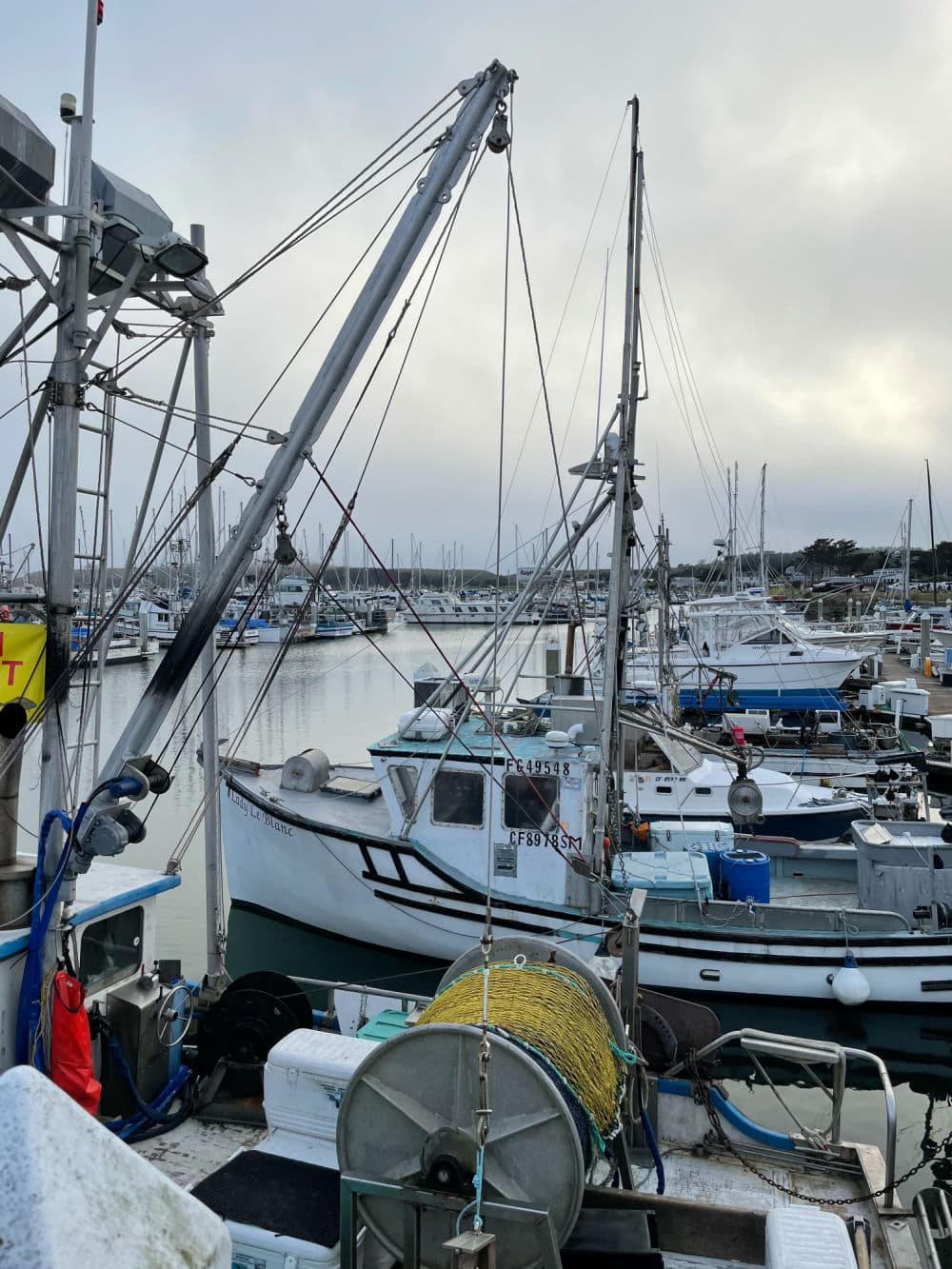 The following morning we just sat on a bluff and watched the waves crash for hours. 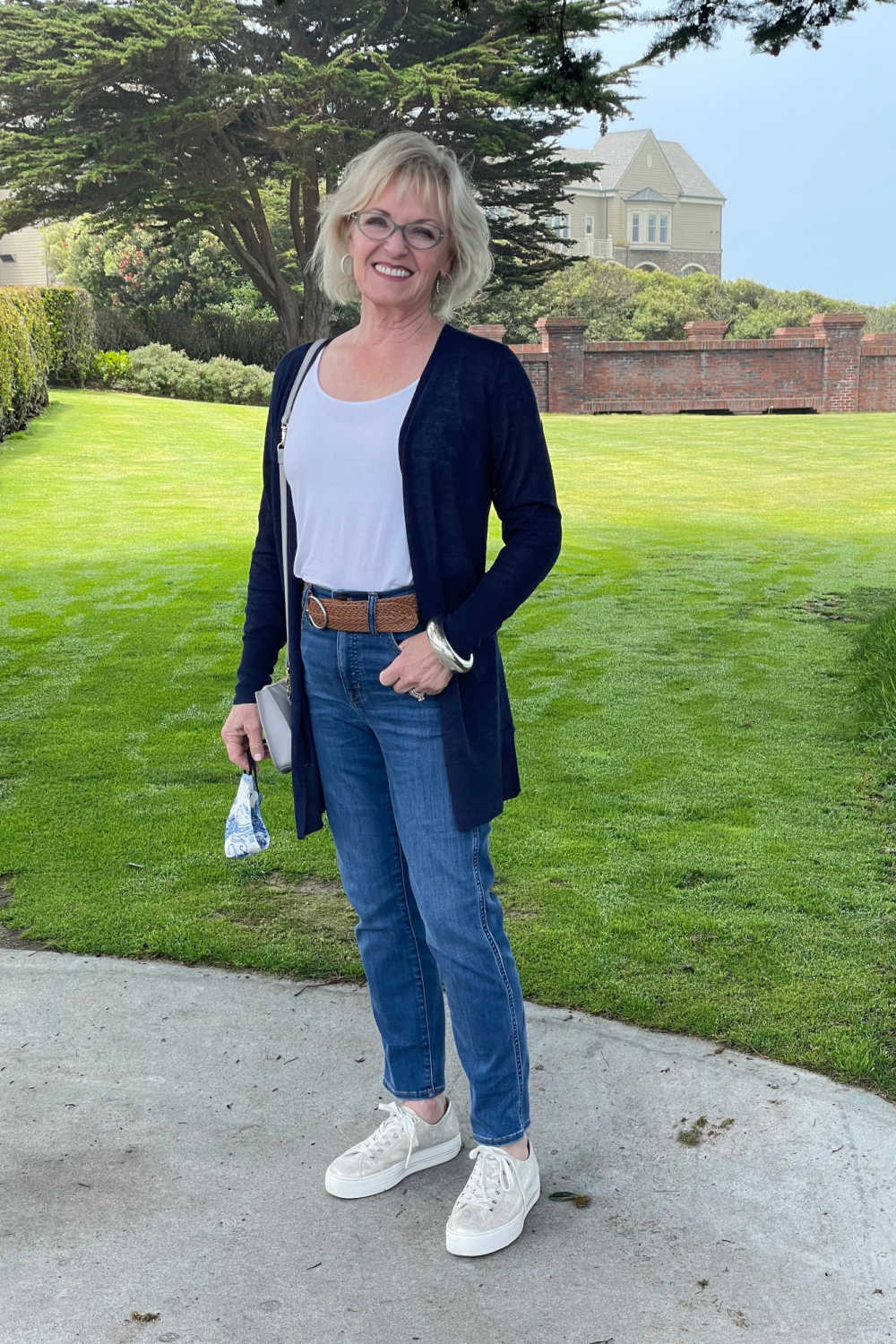 After several hours we drove down to the beach and walked the shoreline. I debated about wearing my metallic sneakers in the sand but they were fine! 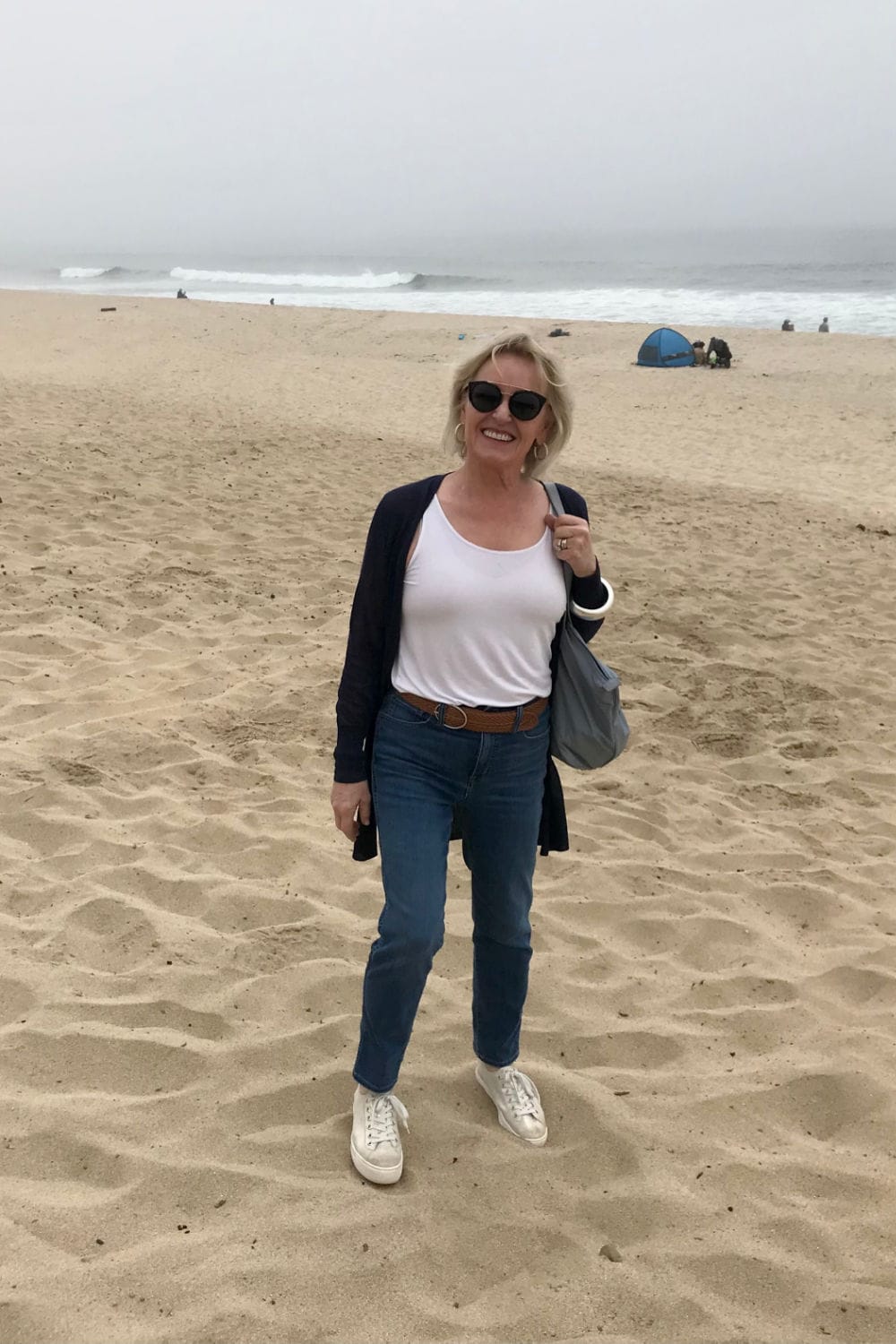 After several hours we headed over to meet our friends…which was the purpose of this whole trip. Our dinner group has been getting together several times a year for over 30 years. We’ve been through it all together and I could not love them more. These are the kind of friends you can’t replace. Zoom calls are nice but they can’t replace a hug. 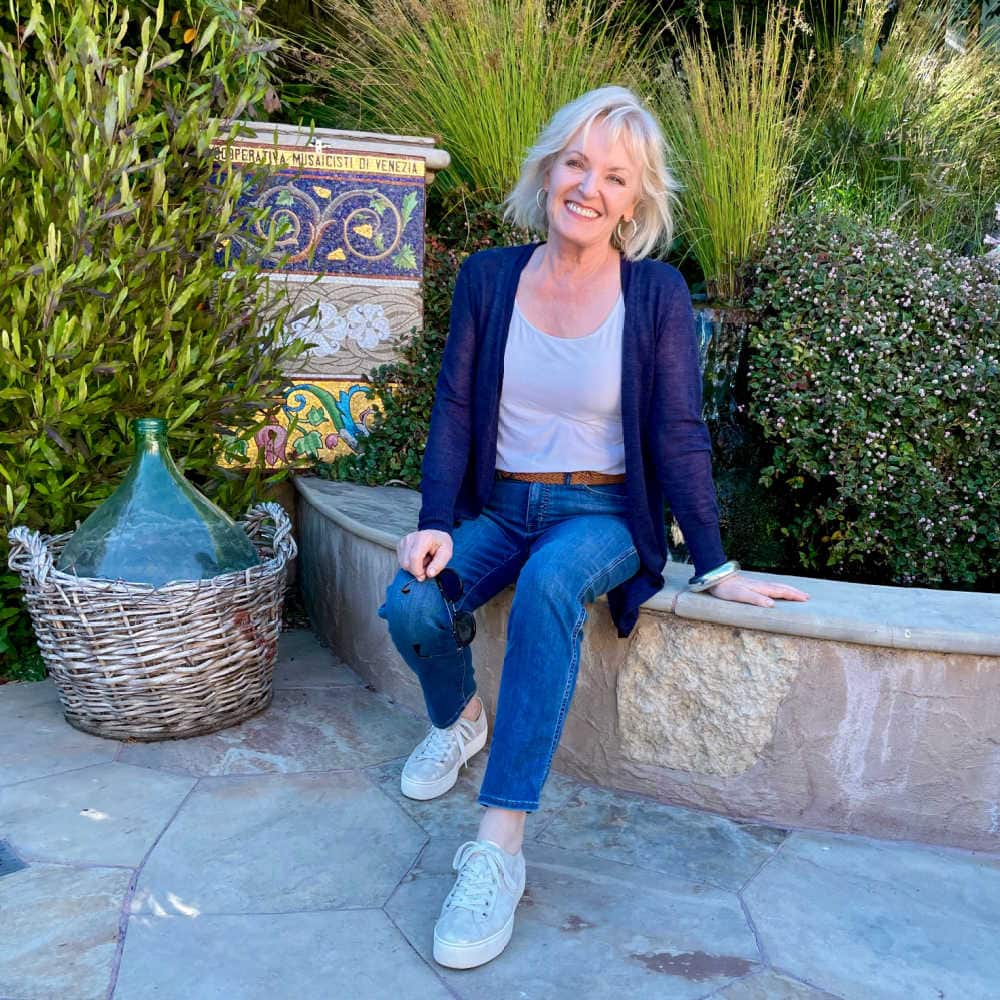 This year has been hard on everyone, some more than others. You may remember that my husband was diagnosed with lung cancer last summer and had a lobe of his left lung removed. And he’s far from alone. Lung cancer has touched our group in a profound way.

Our friend Bonnie, whose home we met at, beat her own stage 3B lung cancer in 2004. In the years since she’s become one of the foremost advocates for lung cancer patients and co-founder of the largest lung cancer foundation in the world. Her foundation funds research into drugs to battle this awful disease but her main efforts are to educate patients and give them hope. 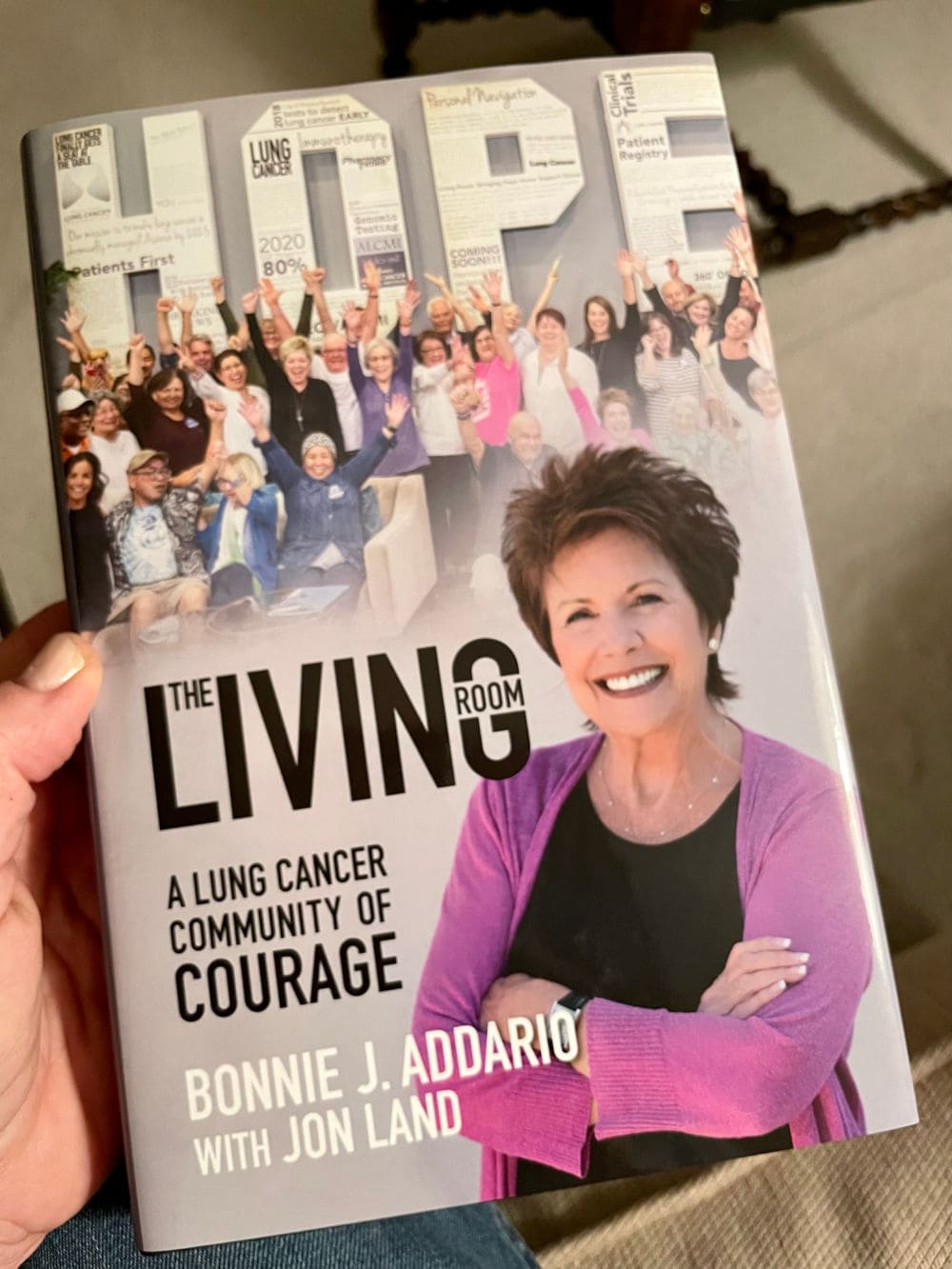 She’s written this amazing book, The Living Room, which shares powerful stories of  22 people who have beaten cancer and are not only surviving, they’re thriving thanks to the array of new treatments and therapies that have changed the face of lung cancer.

The Living Room is also the name of a virtual support group that is live-streamed internationally on the third Tuesday of every month where lung cancer patients find hope and learn that a diagnosis of lung cancer is no longer an automatic death sentence.

Of the 5 families in our dinner group, 4 have been touched by lung cancer. Younger and younger people are being diagnosed every day who never smoked a day in their life so we need to educate ourselves and this book is a perfect place to start. All proceeds from “The Living Room” will go directly to research and patient services.

Has lung cancer touched your life?

END_OF_DOCUMENT_TOKEN_TO_BE_REPLACED

Athletic On The Dressier …

Would You Wear This- …

Updating Our Look- My …

Would You Wear It?

What You Can Wear …

Gearing Up To Get …

How To Prepare For …

How Would You Wear …